Maples Repertory Theatre Receives Sunderland Foundation Grant
MACON, MO — Cast, crew, and theatre camp youth will soon have a newly renovated space in which to rehearse theatrical productions, create costumes and props, and hold education events for the Maples Repertory Theatre (MRT).
Thanks to a $50,000 grant from the Sunderland Foundation, Maples Repertory Theatre will be renovating and upgrading its historic Kisor Performing Arts Building in downtown Macon, MO. Renovations are expected to begin in August. The Kisor rehearsal hall is used by nearly every person in every show sooner or later, including children enrolled in summer theater camps. This project will not only result in an enhanced asset to downtown Macon, it will also have exciting impact on everyone involved in MRT productions.
“As a first-time recipient of Sunderland Foundation funding, we’re immensely grateful for this new relationship with this highly prestigious Foundation,” said Todd Davison, Artistic Director of Maples Repertory Theatre. “This affirms and supports our mission to produce the best possible theatrical experiences for the audiences of Missouri, and our intent to help downtown Macon prosper.”
The Kisor Performing Arts Building is named for Roy F. Kisor a life-long resident and former mayor of Macon, Missouri. It was gifted to Maples Repertory Theatre in 2005 by Dixie Maurer-Clemens, Roy’s niece, upon his death. The building has served as a dance hall, offices and various restaurants throughout its existence before being transformed into rehearsal and shop space by Maples Rep.
The renovated space will improve the 75 yr. old Kisor building’s safety, accessibility, appearance, and suitability for the activities that take place there in support of main stage productions. Anticipated renovations include a new HVAC system, new flooring, new windows, and restroom modifications as well as exterior improvements. In addition to Sunderland Foundation funding, MRT has obtained matching funds that will bring the project budget total to $100,000.
The Sunderland Foundation, headquartered in Overland Park, KS, supports higher education, arts & culture nonprofits, human services, and healthcare and hospitals through investments in the places and spaces where these groups do their work, having done so since 1945. In 2020, $16 million was awarded to arts and culture groups to build and improve their facilities.
Press Release sent to the paper by Paula Cochran
Posted by Reporter Benjamin Nelson

Maples Repertory Theatre is proud and appreciative of the funding received from the Missouri Arts Council, a state agency.

The Missouri Arts Council (MAC) rewarded Maples Repertory Theatre funding to support professional theatre performances at the historic Royal Theatre in Macon, Missouri.  The theatre plays a key role in drawing people from all over north Missouri to downtown Macon.

Grants from the Missouri Arts Council make it possible for many arts organization s to continue their missions, serve their communities, and contribute to the overall economic growth of Missouri. 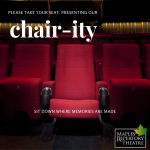 Winter is generally a slow time at the Royal Theatre in downtown Macon. This year the Coronavirus Pandemic has made the theatre especially quiet. However, a group of community supporters are taking advantage of this down time to remodel and refresh the theatre interior including brand new seats.

The Royal Theatre has served the Macon area as a center for entertainment and education for 130 years. It has been the venue for travelling shows, community evens and movies. Blees Military Academy cadets used the theatre for convocations. The first public high school in Macon County (located at Bourke and Vine Streets) did not have an auditorium, so concerts and graduations where heled at the theatre until the “new” school was opened in 1931.

During the period when the Royal operated as a movie theatre (1930-1995) local service clubs and the Chamber of Commerce continued to use the building as a community auditorium. Beginning in the 1980’s Carousel Productions stared producing community plays at the theatre. Since 1991 thousand s of volunteer hours went into cleaning and remodeling the property to make it more suitable for live performances. In 2004, Maples Repertory Theatre opened its first season of professional shows at the theatre.

Now it’s time to remodel and update this valuable community facility. The seeds of this current project were planted over a year ago when Denise Bennett at Macon County Economic Development became aware of a rural development grant from USDA which is available for our area. Maples Repertory Theatre began working with USDA to find a project that could work to the benefit of the area. Re-seating the auditorium including redesigning the balcony was the chosen project. Carousel Productions joined the effort and they were able to present the project to the Industrial Development Authority of Macon County and secured their support and funding. “When we have big shows such as LES MISERABLES, SHREK, or our upcoming BEAUTY & THE BESAST we seat a lot of people in the balcony. This remodel and new seats will make those balcony patrons much more comfortable” said Sandy Coons, Carousel Productions President.

Now the work is beginning. On November 5th the Macon High School FFA chapter removed all the seats from the balcony. This excellent community service work started the remodel project. Eventually the balcony seats will be refurbished and offered for sale in small sets to help fund the ongoing project. The next week other area residents removed the seats on the main floor of the building. Throughout the winter moths all the walls will be re-plastered and painted working toward installation of new seats and new carpeting during March 2021.

“it is great to have so many groups working together on updating the Royal,” said Todd Davison, Artistic Director of Maples Repertory Theatre. Anyone who wants to support the project and leave a lasting memento int he building can do so through sponsoring a seat. A special project called “Chair-ity” allows patrons to inscribe a plaque which will be displayed on the wooden armrest of each new theatre seat. Individuals may sponsor a seat in appreciation or in memory of a loved one or to commemorate a special event. A specific seat in the auditorium may be sponsored, or a “general admission” seat may be chosen at random. Go online at bidpal.net/chairity or call the Mapes Rep box office 660.385.2924 for information about sponsoring a seat.

In the spring a Grand Opening Celebration will be planned to show off the work to the public. “Because of COVID we can spend a little more time and finish more of the little side-projects we have dreamed of. I know everyone will be impressed and proud of the final product” Davison said.

Published in The Macon County Home Press on November 16, 2020.

You can be a part of the future at Maples Rep by sponsoring a new seat! Your dedication will be engraved on a handsome metal tag displayed on your sponsored seat. The cost is $150 per seat, plus an additional $50 to sponsor a specific seat in the location of your choice.

Sponsorships are available now online or at the box office: https://app.arts-people.com/index.php?actions=2&p=2 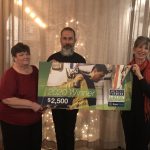 Macon, MO (October 16, 2020) – Local farmers Drew and Becky Belt recently directed a
$2,500 America’s Farmers Grow Communities donation, sponsored by Bayer Fund, to the
Maples Repertory Theatre. The award was announced by Artistic Director Todd Davison and
board president Connie Argotsinger at the theatre’s annual Gala Dinner fundraiser held recently
at the Pear Tree Kitchen and Bar. Attending the gala were supporters and theatre fans from
throughout the surrounding area, including Macon, Kirksville, and Columbia.

“The Theatre is grateful to the Belts and to the Bayer Fund for this award. A donation
like this during a time like this means a great deal to a nonprofit organization like ours” said
Todd Davison, artistic director.

America’s Farmers, sponsored by Bayer Fund, is focused on strengthening rural America
through three community outreach programs that partner with farmers to make an impact in
communities where farmers live and work. The programs have given more than $53 million to
rural America since 2010 and include: Grow Communities, Grow Rural Education and Grow Ag
Leaders. To learn more about the three programs visit AmericasFarmers.com.